This is the extraordinary story of our dream team Matthias (Mätthi) and Dragon.

If anyone wants to know whether Parelli Natural Horsemanship works – these two are the best proof!

At the very beginning of my career as an instructor I held an information event about PNH in Guntmadingen. About 30 people showed up, including a woman with two small children. The boy, Matthias aged about 11 years, with his Page haircut looked like „le petit prince“ and the girl like a delicate doll with a yard long braid. The mother told me that the children were taking vaulting lessons and she had just had bought them their own horse – a 5-year-old Camargue/ Berber cross. I asked her about her experience with horses and she said ’none at all‘! She probably saw the look of horror on my face and, in an effort to calm me down she said that they had friends who had horses and would help them. That reassured me somewhat and when I said goodlye to the family I offered my phone number for the mother to use if she ever had any questions. 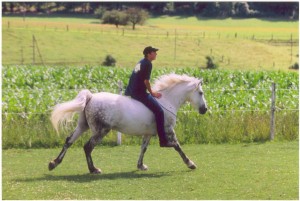 A few weeks passed until the mother called me – totally stressed out. She was all alone with the young children and the young horse because the friends didn’t have any time to help them. She asked if she could come to my class to Guntmadingen. We arranged two lessons for Wednesday afternoon. On the day of the lessons my eyes almost fell out of my head when I saw the mother  walk into my stables with Mätthi sitting on the saddled horse. She saw my surprise of course and told me that they had neither trailer nor a towing vehicle. Therefore, they would just walk the three hours from their place to ours. How is that for a commitment!?

We discussed the lessons and the problem areas. I learned that Dragon had developed into a real clown. The little sister had been bucked off and had broken her wrist. After seeing this Mätthi didn’t want to get on the horse anymore. The mother, in desperation, tried to ride the horse herself and fell off several time too. So this was the sheer horror for the family!

I asked the mother how she came up with this idea to buy their own horse. She told me that Mätthi was a hyperactive child and they had an enormous problem with him. The school psychologist had told them that he would only have one real interest: namely horses. This was the decisive factor for the adventure called Dragon. I advised the mother after some time to bring the horse to Guntmadingen to our boarding stable. This extraordinary effort to walk the route to our training place every Wednesday and to jog  with Dragon 2-3 hours daily was simply too much for them. For she had not only got these two children but three more as well! 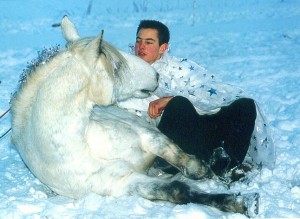 Matthias as a magician

So Dragon came to me and I gave him a basic education. Mätthi and his sister were taken regularly to my classes and spent their holidays with us.  If you want to understand how PNH trains a human –  Mätthi is the perfect example.

With Dragon as his perfect mirror image, then, as he still is now, Matthi had an uphill battle to get his emotions and temper under control. It was a hard lesson for Mätthi until he was able to experience the first real successes. Whenever he wanted to show his now very good relationship with Dragon at a show or in a tournament it would all fall to pieces and he had to cope with his disappointments. He never gave up and continued to train to get his emotions under control.

At home the two have been the dream team for a long time already. Even in the beginning it was incredible how very fond this horse was of the boy. I’ve never seen such a bond between a horse and a human. When I see Mätthi and Dragon I am reminded of the old stories of the Berbers and Arabs. These horses are as faithful and affectionate with their owners as a dog! When Mätthi would be in the kitchen with us while the horses were given their  feed, he would open the window a crack and call out or whistled softly. Dragon came trotting straight out of the box in to the paddock and searched for him. He didn’t care about his oats

These two have a connection that has something magical for me.I have so many fond memories of their partnership. For example, the first time I took the two with me to the BEA in Bern. Mätthi was allowed into the big arena with us instructors and he was understandably nervous. We all ran on foot with our horses at Liberty into the arena. Mätthi’s task was to run faster and faster and then jump onto Dragon bareback – as he had done a hundred times before. He started running at full speed, Dragon at his side. His toe got stuck in a hole in the sand and he slammed down – face forward –  and then lay still. Dragon galloped past him, stopped from full speed,  turned around and galloped back with his ears pricked  and nudged Mätthi with his nostrils. Mätthi was still flat out with his face in the sand. Dragon nudged and poked him over and over again. The audience applauded enthusiastically, as they believed this was part of the show. Then Mätthi raised his head, spat out the sand and stroked Dragon. He scrambled to his feet and clenched his teeth so his limping would not show. Dragon put his head, in his inimitable way, on Mätthis shoulders! Kick ass! – the two thrilled the audience more than we instructors did !  :o)) 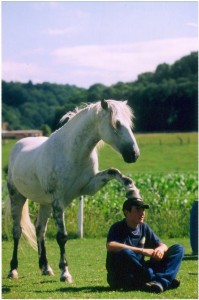 When Mätthi was about 17 years, we took him along to the Equitana in Germany so he could see Pat and Linda live. At Equitana that year there was the premiere of the horse musical „Le Prince“ with Jean-François Pignon. At home, not a week had passed since Equitana and Mätthi  took us out of the house with the words „we can do it now too“ . Dragon was waiting untethered in the yard. Matthi called him and sat down on the ground, Dragon went to stand behind him, lifted his front leg and put his hoof on Mätthis head!

On another occasion we were riding in the woods and suddenly heard a horse cantering. Around the next bend we encountered Dragon with Mätthi, standing in the saddle, a cool smile on his face, and then they just  cantered quietly past us.

Whenever you rode somewhere and saw a white spot on the edge of the forest you knew for sure that this was Mätthi with Dragon laying in the grassland! To this day the most important thing for these two is that it never should be boring!

These two are incredible, I could spend hours telling such stories about  this unusual team.

Mätthi’s parents are convinced that Dragon has had a mammoth share in the personal development of Matthias into the man he is today.

This is the true story of the two which sometimes almost sounds like a fairy tale.

Anyone who has ever experienced Mätthi with Dragon – when they are not  „right brain“ – , understands what I describe.

Standing Ovations on the first Parelli-Summer-Festival 2014